Even though we are more than happy to detail your motorcycle for you here are some tricks of the trade. Maintaining your motorcycles luster and shine after a detailing can be tricky. Learning the upkeep on your motorcycle will keep it looking like the pros detail it every weekend.

Before you start make sure you are in a comfortable shady location and the engine is completely cooled down. First, remove the seat and leather saddlebags. Then cover the battery with plastic sheeting and seal off the exhaust pipe(s).

Next, you will want to do a preliminary wash to remove and surface level dirt or grime. After the preliminary wash use a microfiber towel and your preferred car washing soap and start scrubbing. You want to pay close attention to all the nooks and crannies making sure to get into any hard to reach surfaces. Areas with set-in grease may not come out so easily with car washing soap. For these areas you will need to use a special de-greasing cleaning agent. Once you have the bike fully scrubbed down make sure to hand towel dry right away to prevent any hard water spots from appearing.

Then you will want to work on your tires, dash, and windshield. These areas will need a little extra TLC. While working on the tires we suggest you use a small scrub brush or toothbrush to get all the hard to reach places removing any dirt, grime, or build-up in and around the wheels. After that we suggest using a gentle leather cleaner and conditioner on your dash, then polish immediately after that. You will want to take a little extra care on the windshield, but over all same technique. Clean, rinse, polish, and immediately dry your windshield for a beautiful transparent view.

This is your best bet for maintaining your motorcycle’s detail in-between getting it professionally done. When it’s time to bring it to a pro, give us a call. (512)924-4545.

Cars are very needy creatures. They need consistent maintenance, gas, oil, tires, the list goes on and on. But one thing many car-owners neglect is their exterior wax.

Car wax provides an essential protective layer on the paint of your car. It shields the soft paint from bird poop, calcified rain, tree sap and sun damage.

Carnuba car wax is typically derived from a palm leaf, and is a naturally occurring substance that is used to provide a protective layer and sleek finish to an automobile. However there are other options that my fit your needs better than traditional Carnuba.

We suggest using a polymer sealant on your car after a detail. It’s a synthetic wax that typically lasts a little longer than your Carnuba alternatives. This needs to be reapplied with a detail every three months to maintain protection.

We offer mobile service all over town and can take care of this for you! Give us a call!

The 4th of July means hotdogs, fireworks and most importantly time at the lake! This week we kept busy getting everyone’s toys ready to party this weekend.

Our shop was hustle and bustle all week long but we managed to get everything done by the deadline so our staff can enjoy our 4th on the lake with our clients!

Take a look at these works of art. We had so much fun working on them this week. Next week is going to be even busier!

A week of sports cars!

This week we had some GORGEOUS sports cars come through our doors! New or old, it doesn’t really matter, the care taken during their time here is the same.

These cars were both in pretty good shape, but needing a full detail and single stage polish. We also ceramic coated them!

Sometimes we use our cars so much that they become a tool to us rather than a toy, it’s important to remember the joy and the rush of seeing that gorgeous car for the first time and care for them as such!

Many people are under the impression that detailing is mainly an exterior game. Polishing, paint correction, clay bars, they’re all big tickets that happen on the exterior of cars. But your interior is where you actually ride. It’s where your friends and kids and dates sit, and it deserves as much TLC as your exterior!

For our interior details we do every nook and cranny. We’ll detail your cup holders, dashboard, console, steering wheel and every crack in between. We’ll also vacuum or steam clean your carpets and upholstery (depends on the package you choose) and condition your leather, for the most luxurious ride in town.

What’s the difference between washes?

You may not realize, but there are different ways to wash a car. Going through the drive-thru wash at HEB has way different results than a professional hand wash.

When you use a car wash that has harsh brushes going at an automated rate, with no concern for car type or your paint, you run the risk of putting swirls and micro-scratches on your clear coat. These may not show up in the shade, but trust us, when you’re driving down the highway on a sunny day, they’re super visible.

The best way to protect your car while washing is to hand wash with a soft towel, we use microfiber cloths. This prevents the brush bristles from damaging anything on the exterior of your car.

If you absolutely have to run it through a car wash, we recommend a touch-less. This way there are no brushes or bristles to worry about. Our favorite is the Rudy’s BBQ touch-less car wash. They’re all over the place, work super well and don’t hurt your paint at all!

What to do about Water Spots

We’ve all been there. A heavy rainstorm comes through and your freshly washed car is covered in little water spots.

The water in Central Texas has some of the hardest calcium around. That makes those awful spots more prevalent, and more sticky.

If you just leave them there, they can turn into “hard” water spots, where the calcium actually eats away at the paint on your car’s exterior and can cause serious damage that can cost thousands to fix.

So, after you notice she’s looking a little worse for the wear you decide to wash her and wipe her down. But what do you use to wipe her down?

We’ve formulated a Ceramic Infused Water Spot Remover to solve this problem. The formula is designed to eat away at water spots without hurting your paint in any way, and the extra layer of Ceramic Coating acts as a protective layer for you as well.

Try yours here and let us know what you think!

Lets Go for a Drive

What happened to the days of driving being the main activity? Not just a way to get where you’re going? Central Texas has some of the most beautiful open road you can get. Let’s bring that back!

No matter what type of car you have, brand new or vintage, as long as she can play some tunes and drive, that’s your date night right there.

Roll down the windows, play some Willie Nelson and be thankful that you live in the sunset capital of the world because these days there’s nothing better than an open road and a friend to share it.

But before you hit that gorgeous road, ask yourself, “Is my car presentable?” If the answer isn’t yes, let us help you get her back to looking beautiful. Whether it’s a little dog hair in the back or a full paint correction that needs to be taken care of, we can help you get back on the road looking great.

What do we love more than a Ceramic Coated Audi RS5 that does 0-60 in 3.8 seconds AND room for the kids and groceries?  The people that keep coming back for our services!

This Audi RS5 came in a few weeks ago to get completed ceramic coated. It packs some serious power and now has a coating to match. We use IGL Coatings to maintain and protect your vehicles paint, wheels, windows, and interior. This not only adds value, but keeps washing time down to a minimum.

From full details to ceramic coating, we’ve got you! 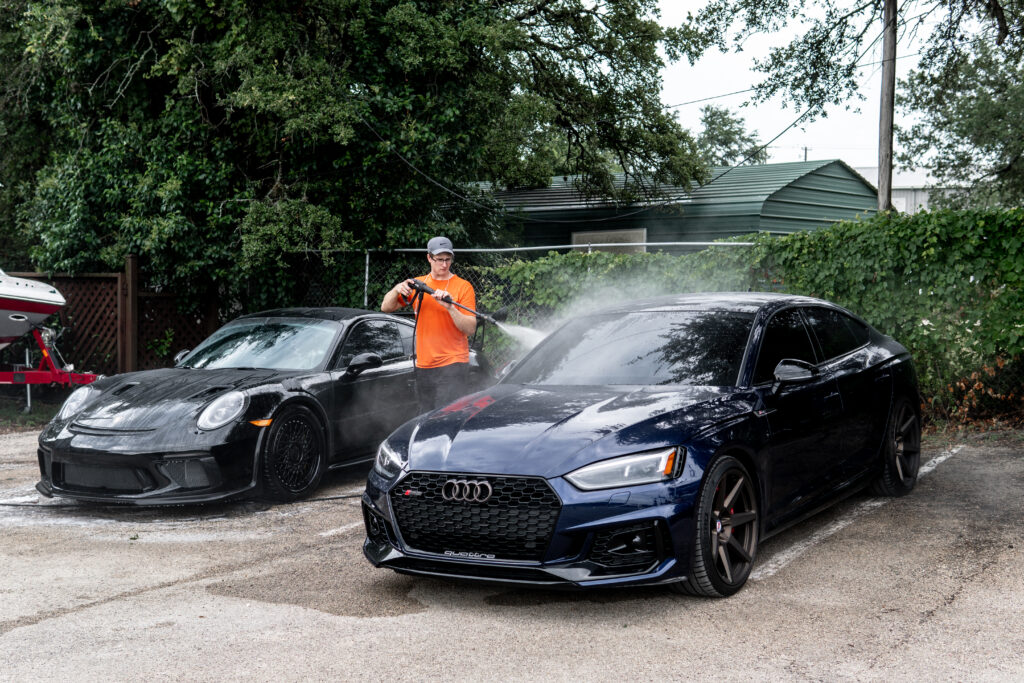 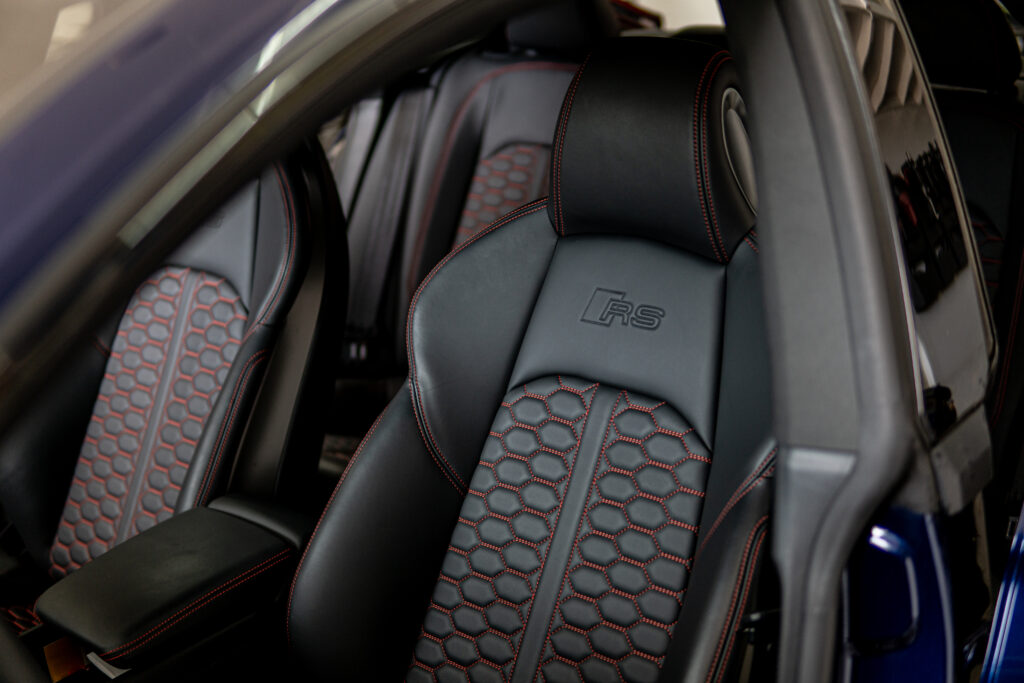 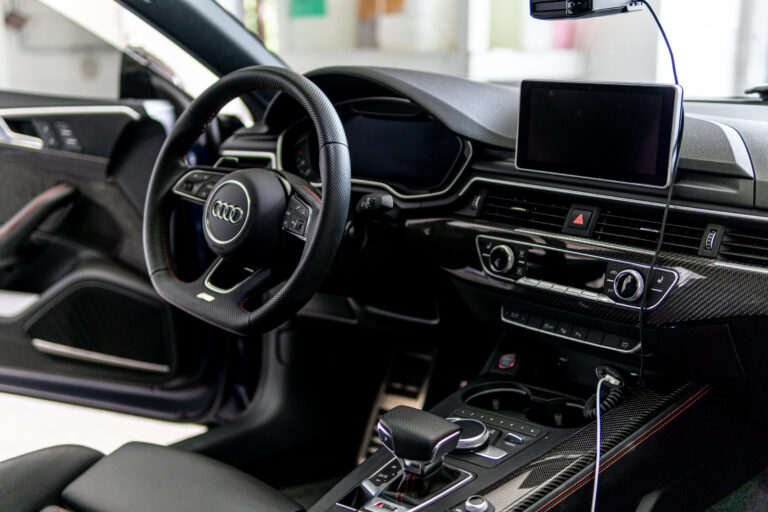 The Nissan GTR – its first debut was at the Tokyo Motor Show in 1969 as a sedan equipped with an inline six cylinder engine pumping out 160 horsepower. The ’69 sedan was touring car, unrivaled by any other touring car at the time. It relied on a four-valve Dual Overhead Cam engine for power and four-wheel independent suspension for its remarkable handling, reminiscent of the Nissan R380 racing prototype.

The GTR went through many changes to get where it is today; the R30, the R31, the R32, and the R34, with plenty of concepts in between each of those iterations. Finally, in 2008, merely 11 years ago, the Nissan GT-R dropped onto American roads. Nissan ditched the Skyline name and dropped in a twin-turbo V6 engine that put out 473 horsepower and rocketed the coupe from 0 to 60 mph in under three seconds. The speed and power this little coupe boasted earned it the nickname “Godzilla”.

Today, Nissan GT-Rs come with 3.8 liter twin-turbocharged V6 engines that pump out an astonishing 565 horsepower and 476 lb-ft of torque. And if that’s not enough power for you, you can also opt for the NISMO edition of the vehicle that’s rated at 600 hp and 481 lb-ft of torque.

Now, this engine isn’t just another engine being pumped out on factory belts by a load of robotic arms. No, an instrument this beautiful and precise requires painstaking levels of craftsmanship and dedication to the legendary GT-R name. Inside Nissan’s expansive engine factory, located in Yokohama, Japan, there are four engineers that have earned the nickname “takumi”. Takumi is a Japanese term meaning “master craftsman” in English, and to become a takumi takes decades of work and dedication to your craft. These four engineers build each and every GT-R engine by hand to ensure the most precise build possible, and they finish off each engine by attaching a plaque with their signature on it. That means there are no two identical Nissan GT-Rs anywhere in the world. A lot of GT-R owners have taken to traveling to the engine factory in Yokohama to personally meet and thank the takumi that built their specific engine, including some famous faces such as late-night talk show host Jay Leno.